To be real I don’t necessarily agree with all of Immortal’s points but I respect his perspective.  This guy puts his boots to the ground and actually implements a lot of the sh*t he talks about so I can’t be mad at him.  I thought this one particular quote about kids stealing music on the internet was interesting.  However, there is a lot of real talk in this.

“Get on the internet and just steal all my music off of it, because I really don’t care about that, I’ve had lots of arguments with executives about that, and I think that they have a lot of audacity accusing children of stealing music when they’ve been robbing artists for years.” 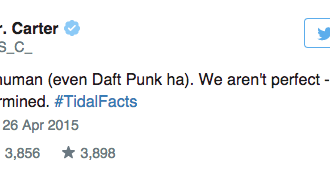 Jay Z and his amazing celebrity friends recently launched the music streaming service Tidal. Earlier yesterday Jay Z decided to jump on his Twitter account and clear the air about Tidal's business model compared to competing streaming services. Needless to say it was a show. Read Jay Z's tweets and more after the jump!
Always gives such great interviews. The world is at a place it’s never been, where anything from the government to the secret lives of celebrities are being exposed. Conspiracy theories are everywhere, even rap! Today, Murs and Guerilla Union announced the full lineup for the Paid Dues 2013 Festival, which will take place on Saturday March 30th at the Nos Events Center in San Bernardino, California. This year's festival will be headlined by Black Hippy (Kendrick Lamar, ScHoolboy Q, Ab-Soul & Jay Rock) and Macklemore & Ryan Lewis.  Hit the jump for the full lineup.
Tech give such great interviews. His perspective on the ghostwriting topic is on point.