One of hip-hop’s godfathers led the pack this week, and it wasn’t by much.  Overall, it was a relatively slow week for album sales following the mammoth opening for Lady Gaga’s latest release, Born This Way.  By the way, Gaga’s sales dropped by 85% in its second week, going from over a million to 169,387.

Steve Jobs parted the proverbial sea of technology and led us into cloud age on Monday when he came out of seclusion to unveil Apple’s iCloud.  During the company’s Worldwide Developer Conference, Jobs gave spectators a first glance at the service that automatically pushes every update, from adding a new contact to purchasing a new song, to the cloud.  iCloud will support up to 10 devices free of charge and every user will receive 5 gigabytes of free storage.  The service allows for easy backup of songs, music, photos, videos, contacts and other files, so for instance if you lose an iPhone and purchase a new one, all you have to do is login to iCloud and transfer all of your content to the new one.

Since its unveiling, it has seemed like the entire music industry has been mystified by the prospect of what the iCloud can offer.  One highlight of the service is that it will instantly store all purchased iTunes music to cloud for free and additionally utilize a matching service for non-iTunes music which will cost $24.99 per year.  Apple’s software will scan your music library and within minutes match non-iTunes music to songs it has in its store.

So what does this mean for the music industry?    Former EMI executive Syd Schwartz told Rolling Stone, “It is one way to make someone pay for music they’ve already bought.   It’s pretty ingenious,”   He added, “I’m sure someone in an executive office at a major label somewhere is going, ‘At least that’s one way we can monetize the stuff people stole from Napster over the years.'” According to the LA Times, Apple signed an agreement this week with Warner Music Group, EMI Music Group, Universal Music Group and Sony Music Entertainment  “call[ing] for Apple to share 70% of any revenue from iCloud’s music service with record labels, as well as 12% with music publishers holding the songwriting rights. Apple is expected to keep the remaining 18%, said people knowledgeable with the terms.”  This revelation is also causing people to speculate that Apple will inevitably offer a streaming service alike Rhapsody or Spotify.    For anyone interested, you can watch all of Steve Jobs’ keynote presentation right here. Hot off the release of their sophomore album, Blade of the Ronin, Cannibal Ox has announced a ten date European Tour.  Hit the jump for the full announcement, ticket info and more details. In this exclusive interview, Rob Markman (MTV, Sway In The Morning) sits down with heralded New York hip-hop duo Cannibal Ox to discuss the difference between the group's 2001 seminal debut album The Cold Vein and their latest release Blade of the Ronin (which is currently available for purchase via iTunes here.) Vast Aire and Vordul Mega open up about linking with producer BILL COSMIQ for Blade of the Ronin and also their creative relationship with one another. Check out the exclusive interview after the jump. 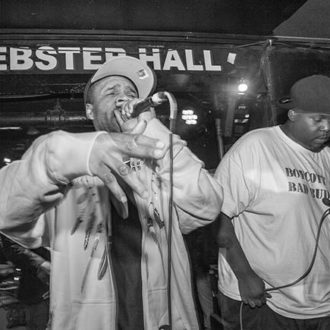 Harlem's Cannibal Ox will be releasing their highly-anticipated Blade of the Ronin March 3rd (you may preorder it via iTunes here) their first album in fourteen years! The duo of Vordul Mega and Vast Aire have already shared cuts “Blade: The Art of Ox” feat. Artifacts & U-God, "Harlem Knights," and "Iron Rose" feat. DOOM. But now you may listen to the full album. That's right, all nineteen tracks are available for free stream after the jump! And don't forget about Cannibal Ox’ Blade of the Ronin album release party at Webster Hall with GZA, Freeway, and G-Jet. You don’t wanna miss out! Cannibal Ox is set to drop their highly anticipated followup to 2001's The Cold Vein in 2015! Read more after the jump. A week back Ghostface Killah announced his forthcoming album 36 Seasons (his thirteenth full length album to date), which will be dropping December 9th. With that Pretty Toney shared the first single, “Love Don’t Live Here No More”. The second single, "The Battlefield", however, is more on the gritty side featuring NYC all-stars Kool G Rap and AZ. It's worth noting that in addition to "The Battlefield" AZ will be appearing on four more tracks on 36 Seasons. Listen after the jump! After surprising hip-hop heads with the announcement of his forthcoming studio album 36 Seasons earlier in the week and sharing a new cut “Love Don’t Live Here No More” Ghostface Killah returns with a preview of the album. The album features the likes of Kool G Rap, AZ, Pharoahe Monch, Rell, and more. Listen to the sampler after the jump. Here's a welcome collaboration: Kool G Rap and Guilty Simpson. When you look at the two rappers, on paper, this collaboration makes all the perfect sense. You've got a legend in the game in G Rap, who has put out hardcore hip-hop classics (Road to the Riches, Wanted: Dead or Alive, Live and Let Die) and Guilty Simpson, a gruff and tough Detroit rapper with all the sensibilities that make for a master ghetto storyteller. Pinning G Rap and Guilty Simpson together is a match made in heaven and their track "Chess Never Checkers" is a solid cut in this potential canon. Listen after the jump.